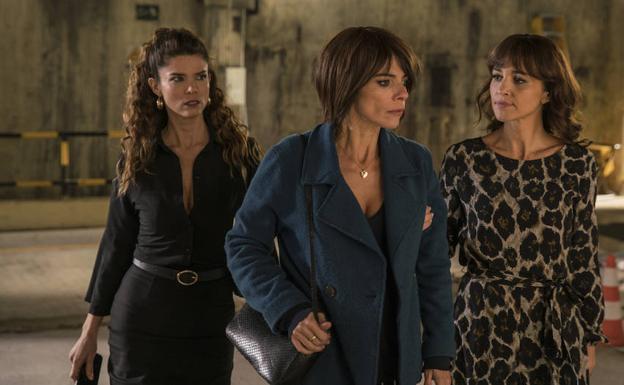 Now in its 15th edition, the London Spanish Film Festival returns to Ciné Lumière to showcase some of this year’s most exciting Spanish films. From enigmatic thrillers to fresh comedies, seasoned directors’ comeback to debut films, expect the best contemporary cinema from Spain.

At the age of 30, successful Catalan lawyer Eli (Aina Clotet) has it all: the career, the boyfriend, the family, and a baby on the way. However, on the day of a major, high-profile court case, her father suddenly disappears, throwing the entire business into jeopardy. After several frantic calls to her nearest and dearest, Eli postpones the meeting as much as possible, racing around Barcelona to unravel myriads of mysterious secrets that have, until now, been kept under wraps. The camera never leaves her side in this intense psychological thriller played out breathlessly in real-time… Winner of the Movistar+ award for best full-length film in the Málaga Festival’s ZonaZine, this beautifully balanced work is shot by a wide array of graduates from the Barcelona film school (ESCAC), displaying a wisdom and maturity far beyond their tender years.

Paris, 1930. Luis Buñuel and Salvador Dalí are the figureheads of the Surrealist movement. Their masterpieces An Andalusian Dog (1929) and The Golden Age(1930) have provoked intense scandal for their shocking, violent imagery. Penniless, Buñuel must postpone his next project, a documentary focused on one of the poorest regions in Spain: Las Hurdes. Yet in a stroke of bizarre, miraculous luck, his best friend Ramón Acín wins the lottery, and together they set off to film this unreported hardship. Tempers flare, however, for whilst Acín prefers an unvarnished, pared-back, no-frills approach, Buñuel manipulates reality to achieve his intended political and often Surrealist effects. Based on a true story, this animated “making of” of Buñuel’s Land Without Bread (1993) asks, with a healthy dose of humour, whether the camera is always, to some extent, a partisan, prejudiced device, exploring the curious complexities of ‘fact’ and ‘accuracy’ within taped, captured footage.

Leyre (Maribel Verdú) is a well-heeled divorcee enjoying a comfortable life at her villa in Bilbao. However, her world is turned upside down when her son Asier kills her ex-husband stone-dead. In an instant, Leyre will transform from aspiring cupcake entrepreneur to protective mother, going to absurd lengths to save her son and hide the crime from the police. As the mayhem piles up and up in this fresh, hectic, and hysterical comedy, Leyre is forced to navigate the amorous attentions of son’s friend Julen, the tax-fraud schemes of her ex-husband’s widow, and the volley of frank and hilarious comments from her ageing, no-nonsense mother.

Peret, my name is Rumba (Yo soy la rumba)

Winner of the Best International Film at the MUVI Music Film Festival 2019 and a must-see for music lovers, this documentary traces the life and work of an enigmatic singer and guitarist who, raised in the humble, gypsy neighbourhood of Sant Antoni, Barcelona, would be universally hailed as the ‘King of Rumba’ for his fusion of flamenco song with Latin American beats and rhythm. During a career spanning six decades, from the mid-1950s to his death in 2014, Peret rubbed shoulders with Pérez Prado and Elvis Presley and released global smash-hits such as Borriquito. From his enforced performance at Eurovision, to his long break from stardom to become an Evangelical pastor in the USA, to his triumphant return at the 1992 Barcelona Olympics, Peret: My Name Is Rumbaprovides a warm, intimate portrait – through heartfelt testimonies from grandchildren and friends (Petitet, Justo Molinero) – of a musician full of paradoxes but also, and most importantly, a deep kindness and an irrepressible love of song.

When little Alba is kidnapped, her mother Raquel has 24 hours to find €35,000 – or 70 x €500 bills, nicknamed ‘binladens’ in Spain, because no-one ever sees them. In desperation she locates a bank willing to put up the loan, but mid-transaction two robbers suddenly burst in, wanting the money for themselves. Raquel must think fast, outfox her rivals, and save her daughter’s life – no matter the price. This third full-length feature from director Koldo Serra is a pulsating watch, full of twists and turns and fabulous performances from the two female leads, Emma Suárez and Nathalie Poza.

Isidro (Carlos Iglesias) is but one of many victims of the Spanish financial crash. Unemployed at the age of 56, he soon discovers that nobody wants to hire a senior — even one with 30 years of relevant experience. His friends Desiderio (Ramón Barea), a writer of romantic fiction, and Arturo (Roberto Álvarez), a retiree desperate to be a grandfather, feel similarly out of place and behind the times in a globalised world in which image, youth, and technology reign supreme. Even so, the trio refuse to give up, joining forces to prove that they still have something to offer. Side by side they launch a modern, forward-thinking (or so they think) business from scratch: a nursery for toddlers. What could go wrong!? The first full-length feature from director Santiago Requejo, Abuelos is jam-packed with warm-hearted, feel-good humour — and a sharp critique of cultural assumptions about the elderly.