Beyond the Eye: Prince Baltasar Carlos in the Riding School 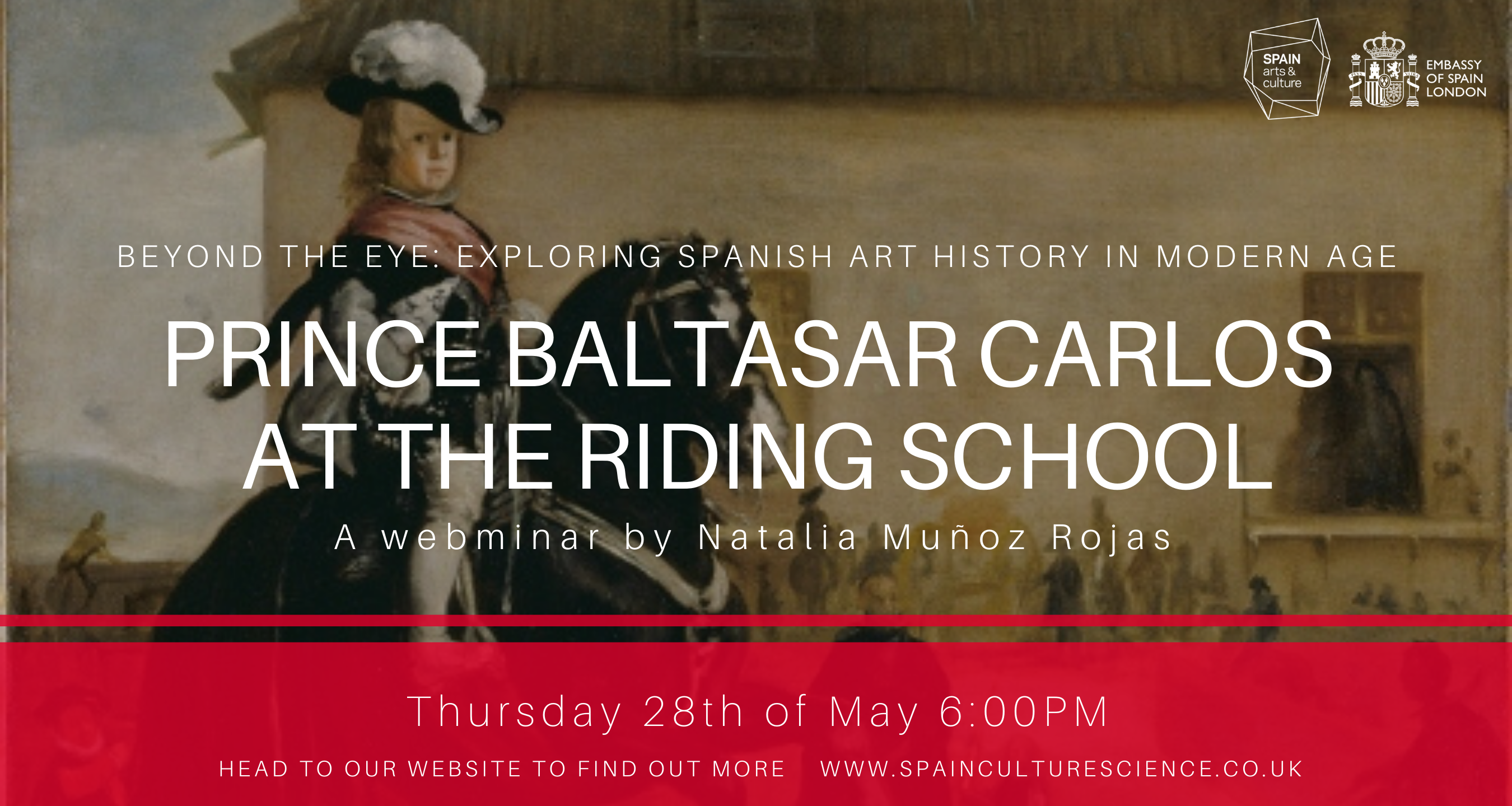 The Office for Cultural and Scientific Affairs at the Embassy of Spain is proud to present our latest series of webminars:  ‘Beyond The Eye’. Exploring Spanish Art History in the Modern Age, the aim of these talks is to dive into those aspects of artworks, collections and other elements of the visual culture of the moment that can’t be deciphered on a first look.

This painting depicts Prince Baltasar Carlos (1629–1646) age seven riding on the grounds of the Palace of the Buen Retiro, on the outskirts of Madrid. Behind him a valet hands the court’s riding master a lance, which he will in turn give to the prince. In the background, other members of the court prepare to watch the spectacle, whilst, in the middle ground, a rider is shown running at the tilt, foreshadowing the exercise the prince is about to engage in. On the 4th February 1636, the young heir to the Spanish throne practiced tilting for the first time. This was a momentous event in the life of the young boy, worth being recorded in the city’s official records of royal visits and births, and portrayed by the court painter, Diego Velázquez (1599–1660).

This highly original composition is a combination of equestrian portraiture and genre scene. It is a steep departure from previous equestrian portraits and breaks the sober and restrained conventions of Spanish royal portraiture. The thinly and sketchily painted scene unrolling behind the prince takes the viewer deep into areas of the court never seen before where less formal activities took place. Yet, despite the relaxed atmosphere of the scene, this is a powerful image that conveys a strong political statement. The prince’s masterful control of his horse and the exercise he is about to engage in foretell his ability as a ruler and future leader of the Spanish armies. The birth of Baltasar Carlos had brought new hopes and positivity to the Habsburg Court at a time of decline in the Spanish Empire.

The present painting is a contemporary version of the Prince Baltasar Carlos in the Riding School, painted by Velázquez around 1636, now in the Grosvenor Estate. Commissioned by the powerful First Minister Count-Duke Olivares (1587–1645), it prominently depicts Olivares in the foreground, standing beside the heir to the Spanish throne. Both paintings are closely related, yet some key differences in the figures depicted, particularly the absence of Olivares, have raised numerous questions regarding the attribution, dating and commission of the Wallace version. The recent cleaning and removal of the old discoloured varnish has enabled us to once again appreciate its original beauty and detail. This and the technical analysis carried out on it may help us address some of the many questions surrounding the painting, allowing us to look at this masterpiece with fresh eyes.

Natalia Muñoz-Rojas, the Enriqueta Harris Frankfort Curatorial Assistant of Paintings at the Wallace Collection, carries out research on the collection’s paintings and is involved in the organization of temporary exhibitions and symposia relating to Spanish art.

Natalia read History of Art at the University of Warwick and completed a Masters on Northern Renaissance Art at the Courtauld Institute, focusing on the cultural exchanges between northern Europe and the Iberian Peninsula. She has worked at the Fundación de Amigos del Museo del Prado and at Christie’s. In addition to her academic works on the Bosch’s Garden of Earthly Delight, a Spanish School Virgin and Child in Gothic Architectural Setting in the Victoria and Albert Museum, and on the trascoro of the Cathedral of Palencia, whilst at Christie’s, Muñoz-Rojas researched and catalogued Old Master and 19th Century paintings from the Italian, French, Dutch and Spanish schools amongst others, working on Zurbaran, Orientalist painters traveling to Spain and Sorolla.