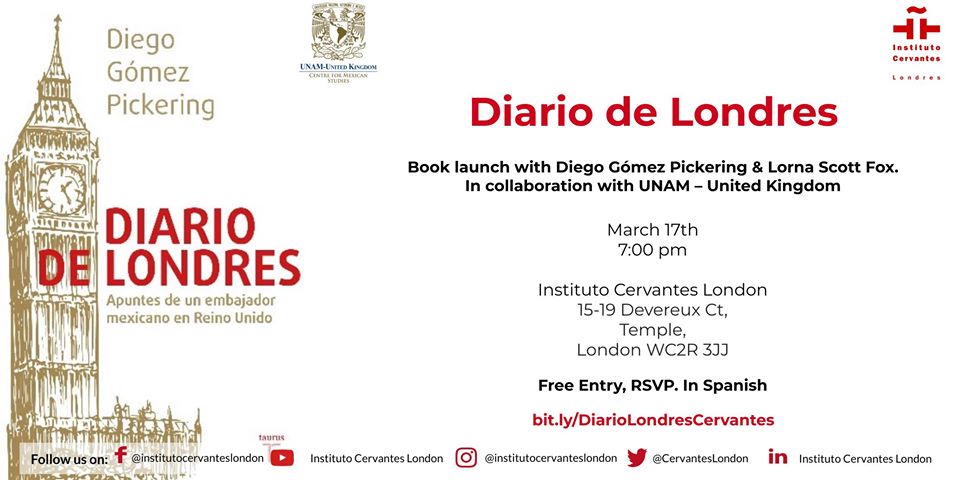 The 17th of March, at the Instituto Cervantes London, the book “Diario de Londres” is going to be launched.

In his book, the writer Diego Gómez Pickering recounts the days in which he lived as an ambassador to the United Kingdom with a delicate and scholarly prose. History, landscapes, portraits, literature and politics are just some of the themes that he explores in ‘Diario de Londres’ and he leaves the audience wanting to know more about Great Britain.

His work has been translated into English, French, Catalan, Swahili, Arabic and Russian. Lorna Scott Fox (commentator) is a British journalist, editor and translator who has lived in different countries. His articles and reviews have been published, among others, in the London Review of Books, the TLS and El País. Among his most recent translations are ‘Marriage as a Fine Art’, by Julia Kristeva and Philippe Sollers, and ‘Petite Fleur’ de Iosi Havilio. Ángel Gurría Quintana (commentator) is a historian, journalist and literary translator. He works at the University of Cambridge. He was born in Leeds but grew up in Mexico City. He writes regularly about foreign literature for the Financial Times. He has translated works of Martin Amis, J.F. into Spanish. Elton and R.K. Narayan His English translations include the anthology of Brazilian tales ‘Other Carnivals’, and the novel ‘The Return’, by the Portuguese writer Dulce Maria Cardoso.

More information can be found here.