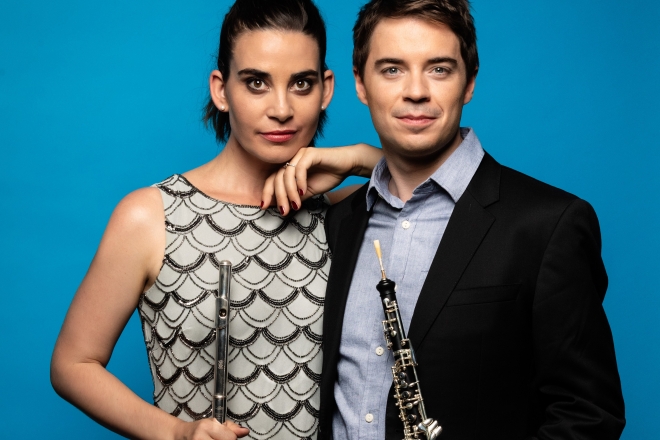 Following a successful debut performance at Hamburg’s Elbphilharmonie, the ECO is joined by Australian flautist Ana de la Vega and the winning Spanish oboist Ramón Ortega Quero to perform a sparkling programme designed to highlight the magical relationship between oboe and flute.

To celebrate the release in January 2020 of their new PENTATONE album, ‘Haydn & Stamitz’, Ana de la Vega and Ramon Ortega Quero join the ECO for an evening of rediscovered masterpieces by Haydn, Stamitz, Cimarosa and the young Mozart: music of star-crossed romance and sparkling wit. Elgar’s much-loved Serenade looks on with a knowing – and very English – smile.

A combination of instruments barely explored since the great Swiss collaboration of Heinz Holliger and Aurèle Nicolet in the early 1980’s, the two musicians bring to life some of Haydn’s very late works – commissions by King Ferdinand of Naples, and forgotten gems by Carl Stamitz which have remained in manuscript for over 300 years. Full of life, genius and operatic charm, these works uncover the mystic love affair between the flute and oboe – a relationship intrinsic, almost cornerstone, to the Symphonic repertoire, now brought to the fore.