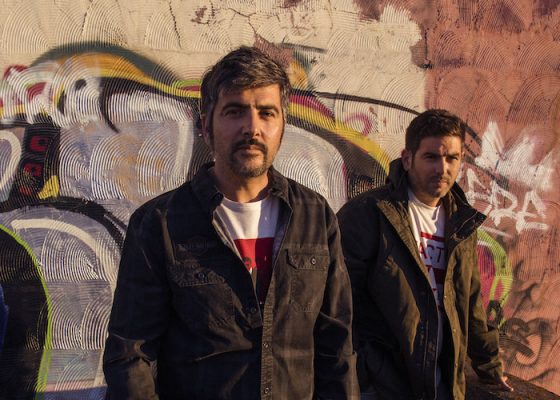 After their sold out debut at O2 Shepherd’s Bush Empire in 2017 as part of La Linea Festival, Estopa comes back to London to celebrate their 20th anniversary and present their new album ‘Fuego’ at the Roundhouse.

Estopa is formed by the Múñoz brothers, David and José Manuel, from Cornellá de Llobregat (Barcelona). Their history is simple and modest, as they are. Their interest in music started quite early, when they were kids, with the music they listened to in the back of the car when travelling to Extremadura (where their family is from), with tapes of Los Chichos, Los Chunguitos, rumba groups, flamenco, rock…An original mix that, years later, resulted in street-rumba sound and fresh and direct lyrics that made Spain fall in love from the first moment.

Everything started at home, in their neighborhood, with guitar strumming and songs composed in their breaks from work. In fact, the name of the group came from their job at the car factory SEAT, because of an expression their old boss used to keep the workers on their toes “Dale estopa a la máquina!“ (Crank it up!). They firstly recorded a demo with songs that they later included in their first album, ‘Estopa’, launched in 1999. With this work, they became to be the revelation group of the year in our country, with more than 2,000,000 sold copies and most of their biggest hits, such as “Por la raja de tu falda” o “Me falta el aliento”. Their first album was followed by ‘Destrangis’ (2002), ‘La calle es tuya’ (2004) and ‘Voces de ultratumba’ (2005), keeping their authentic sound and consolidating their fan community.

Estopa reached their most successful moment  of their career with the tours of their following albums (‘Allenrok’, ‘Estopa 2.0’, ‘Rumba a lo desconocido’)- their songs “El Run Run” and “Cuando Amanece” reached number one on Billboard’s chart in Spain– ; and, as the course of a such a stabilized band, they decided to take a break to focus on composing new lyrics.

After four years, the longest pause period of their career, they came back with their characteristic style formed by rumba and shameless pop-rock, but with a renovated sound. ‘Fuego’ (2019) is one of their most special works, because it shows the Múñoz Brothers are willing to continue in the playlists of their most faithful audience and conquer new generations. The album is composed of ballads and energetic songs that, along with their biggest hits, will make the concert in London unforgettable.