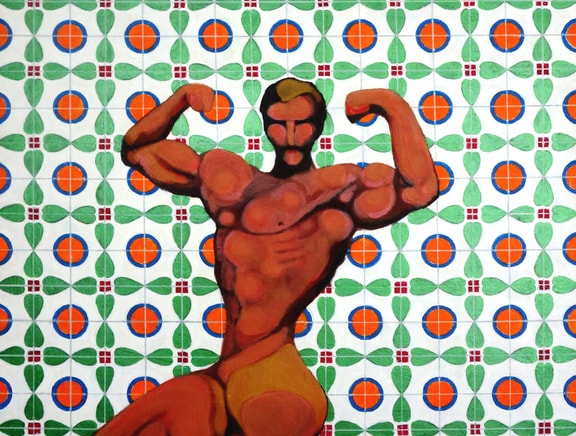 The two paintings are a playful juxtaposition of masculinity and femininity on colorful Portuguese tiles. ‘Gay Boy’ is Gomez’s sweet and cheeky celebration of being young and camp. With ‘Physical’, Gomez subverts the notion of masculinity by altering the conventional shape of a bodybuilder to give him a more slender, almost androgyneous, silhouette. ‘Physical’ and ‘Gay Boy’ are part of Gomez’s latest series of figurative paintings in which he wants to put his exploration of Gay identity in a context that also honors his discovery of Portuguese traditional architecture. Gomez describes this series as a small departure from his previous work: “until very recently, my Southern Spanish roots have been a constant source of inspiration; having been living in London for more than two decades, I wanted to create through my paintings a bridge between the importance of my Andulacian cultural heritage and my spontaneous observations of Londoners seeking moments of pleasure in life. This new series is still about creating bridges between two different worlds, or shall I say, between two different attitudes to having pleasure in life, but it is also, and foremost, about embracing the beauty of the male body, whether it is masculine, feminine, androgyneous, mixed race, camp or not”.

José Gomez will talk about his two paintings in Loudest Whispers ‘Meet and Greet The Artists’ event, soon to be announced.