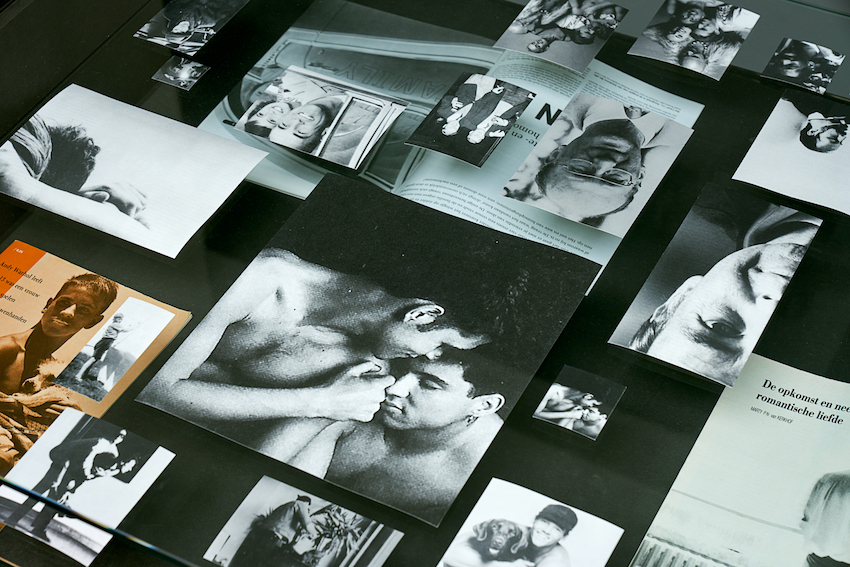 Taking part in the 2021 edition of the photography festival ‘Peckham24’, curator Raquel Villar presents Poetics of resistance from the archive in two acts proposes, a re-reading of the archive as a catalyst that imagines and makes visible plural manifestations of queer masculinity thought the works of the Spanish artists Pablo Lerma and Javier Hirschfeld. Archives function as keepers of history, often of a specific time, locality, or community. However, they are by their very nature incomplete. Archives are representative of the personal tastes or public agendas of those in charge of their making, therefore they are shaped not only by what is included but more importantly by what is left out. Both Lerma and Hirschfeld’s work is rooted in their personal experience of being unable to self-identify with the stereotype of a gay man created and perpetuated by heteronormative expectations. As a result, their work sheds light onto different performativities of being queer.

The ‘two acts’ in the title of the exhibition refers to the two different approaches to the archive. Both artists share the purpose of interpreting it in a gesture of subtle solidarity to imagine more nuanced and inclusive spaces within and for the queer community. It also refers to the two different temporalities on each of the works; whereas Lerma narrows down his research to images distributed in the 70s-90s, crucial decades for the formation and dissemination of the contemporary queer culture and – most importantly for Lerma – of queer solidarity movements, principally present in safe spaces known as queer villages. Hirschfeld establishes an aesthetic connection between images from the early 19th century with contemporary images of dating apps, to refer to the decline of these safe spaces.

Pablo Lerma’s work It Doesn’t Stop at Images is an on-going project in three chapters, two of which will be present in this exhibition. Exploring the IHLIA archive, the largest collection of images and information on the LGBTQIA+ community in Europe, Lerma dissects three major queer magazines: Homologie , San Francisco Sentinel and Lambda . Lerma is interested in unearthing the unfamiliar images of queer day-to-day lives that move beyond the stereotypical representation of gay men, masculinity, and queerness. His installation will combine a selection of images and text from the chapters 1 and 2, which explore the archival imagery in the magazines Homologie and San Francisco Sentinel . From the later, Lerma extracts the texts that were used to describe gay, the gay community and its struggle throughout this period and designs 40 posters, 18 of which will be available for the audience to take. From the former, the artist selects images of love, intimacy, and affection between men. Whereas San Francisco Sentinel situates and enunciates the historical LGBTQ battle for visibility and rights, Homologie is an atemporal manifestation of gay love, care, and warmth. The paradox of this composition prompts to reconsider queer representation in the media and history. He is committed ‘to showing images of daily life, mundane pictures, those that show intimacy in a way that is not sexual; those that show the quotidian in a way that is not shocking; those that show tenderness and affection in a way that is familiar and not promiscuous; those that show struggle in a way that is not socially stigmatizing’.

Javier Hirschfeld’s Profile also considers expected images of gay masculinity, but in this case, the artist is concerned with the politics of self-representation in contemporary dating apps such as Grindr and Tinder. Hirschfeld examines the visual imagery of these ever-growing contemporary archives, identifying and interpreting trends such as the extended use of images of natural settings as profile pictures. If on one hand, the artist observes that the use of this visuals offers a fresh alternative to the predictable stereotypes within the gay community in line with what is known as emotional capitalism, whereby individuals are forced to self-commodify their bodies and follow stereotyping aesthetics of self-representation to create the necessary appeal to navigate and succeed in these platforms, on the other, Hirschfeld also reflects on the dimensions of contemporary queer visibility and representation, or lack thereof; to not respond to expectations, the individual becomes invisible.

Profile establishes a parallel with carte-de-visite , the first give-away studio portraits of oneself that became immensely popular in the mid-19th century in France and Britain. Cartes-de-visite were the catalyst of an ego culture that set the parameters for the visual representation of individuals, becoming one of the first devices for self-promotion and in many cases flirtation. The artist invites the viewer to consider the consequences that dating apps have on spaces for cruising observing that the transition from analogue-to-digital brings certain loss of queer presence in urban areas. In his view, these apps are displacing gay bars and other queered spaces, contributing to the slow death of the gay village that had afforded political visibility to the LGBTQIA+ community.

Whereas It Doesn’t Stop at Images pays homage to those who came before by bringing to the fore and normalising historical images of daily manifestations of the LGBTQIA+ community that were rendered invisible in favour of stereotyped images that would entertain the heteronormative gaze, Profile centres its focus on contemporary digital archives identifying alternative modes of self-representation and their contradictions, and sheds a melancholic light over the loss of physical political spaces for gay communities. At a time when homophobic attacks are on the rise – in the last two years in the UK, hate crime against queer people have doubled and just a month ago, Spain saw a 24-year-old being beaten up by five people at the chant of ‘faggot’, dying shortly after due to the injuries – creating spaces that reflect and celebrate alternatives to heteronormative ways of being in the world is paramount.

Both Lerma and Hirschfeld offer novel approaches to LGBTQIA+ visibility opening a dialogue for more nuanced, plural, and multi-layered representations of queerness. Their research-led practices are responses to the archive and the different strategies of silencing and emotional absence. Their works offer new visual articulations of spaces of plurality, diversity, and solidarity with and amongst the LGBTQIA+ community.