The Little Pony by Paco Bezerra 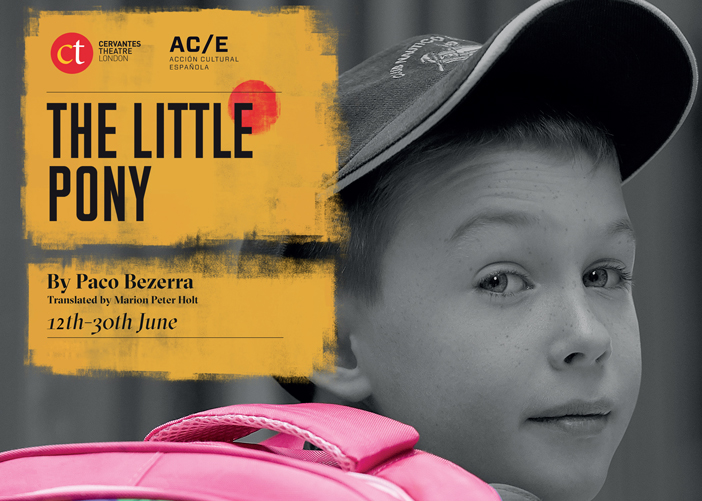 Timmy is being bullied at school because of his favourite backpack, a bright pink backpack full of little ponies from his favourite TV series. Daniel and Irene try to confront the brutal school bullying that Timmy is subjected to. A school that protects its bullies and a couple that tries to do the best for their child will witness how Timmy escapes to an imaginary universe to protect himself from the insufferable reality.

‘I once read the news on Gryson Bruce, a 9-year-old boy from North Carolina, who in 2014 suffered several physical and verbal attacks as a result of carrying a My Little Pony backpack. He was forbidden to bring the backpack to the school and I couldn’t believe it. What is better, to follow the views of the majority or to defend your own child’s freedom of choice?‘  Paco Bezerra, playwright.

90 minutes with no interval

Paco Bezerra is a recipient of numerous awards, including the National Literary Drama Award in 2009 and the Calderon de la Barca Theatre Drama Prize for New Authors in 2007.  His plays have been premiered in eleven countries and translated in more than ten languages. In addition, his plays were showcased as rehearsed readings at festivals world-wide. Paco Bezerra’s notable works include: The Little Pony, Grooming, Inside the Earth, Mr Ye Loves Dragons, Lulu, Fedra, The Holidays Start Now, The School of Disobedience and Ventaquemada.

Paul Alberston graduated from the Guildhall School of Music and Drama and became a leading actor for the Glasgow Citizens Theatre over a period of ten years. Other recent theatre credits include: White Fang and The Man Who Shot Liberty Valance (both at the Park Theatre, London); Who’s Afraid of Virginia Woolf (Kings Theatre Edinburgh); The Rover (Hampton Court), Betrayal (Byre Theatre St Andrews); The People Next Door (Theatre Royal Stratford East); Damages (The Bush Theatre); and Carl in Carver (The Arcola). Recent film and TV work include: Extras with Ricky Gervais; Sherlock; Love Soup; Holby City; Heartbeat; Coronation Street; All at Sea; Honourable Rebel; Excalibur Rising; The Great Director and Radioactive.

The Cervantes Theatre opened in November 2016 and was shortlisted in the 2018 The Stage Awards.  It is the home of the Spanish Theatre Company, a charity that aims to bring the best Spanish and Latin American theatre to London reaching British audiences, thereby promoting Spanish language dramatic arts. The Cervantes Theatre was founded by the renowned Spanish director, producer, and actor, Jorge de Juan. His directing credits include The Public, The Grain Store, End of the Rainbow, Dracula, The 39 Steps and The Woman in Black.  As an actor, he has appeared in more than 20 plays, 50 films and TV series.  He received the Francisco Rabal Film Award for his starring role in El Mejor de los Tiempos (1990) and the Turia Theatre Award for his performance in La Mujer de Negro (1998).  As a producer and writer, his film, Bala Perdida, starring David Carradine, received the Best Film award at the Mostra de Valencia Cinema Awards. Recently, Jorge has been collaborated as a dramaturg in M-Dao for the English National Ballet.